The objectives included:  Inspect GH1 for Queen, Add the Ant Deterring Additions, and Make Room for a Third Hive

For the first time, we entered the hives at dusk when the bee activity was very low.  That’s because we had to move the hives.  Temps were in the mid-80s, sun had gone down, not much breeze, just a beautiful day that turned to a beautiful evening.  Both hives were highly active around 5PM.  Our mission began around 7:30PM.

In beekeeping class, they tell you to place the hives where you plan to keep them, because moving hives is no easy feat.  When filled with bees, honey and comb, one 8-frame medium box can weigh about 40 lbs.  It has to be done in chunks and, believe me, the girls do not like to be moved around.  Bees also become easily disoriented when their hives are moved.  Even if moved only a few inches, they may have trouble finding their way home after flying out.  The rule is, anything more than 2 feet doesn’t matter.  You may as well move it 2 miles.  Of course, I’ve watched a number of YouTube videos on the subject, but since we were talking inches rather than feet, we decided to take the risk and just shift them without further measure.

We had both hives on 2 levels of cinder blocks.  Since the hives are growing in height, we decided to lower them down one level. We also decided this would be a good opportunity to move Green Hive 1 (GH1) to the left about 8 inches so we can add a third hive in the center, when that time comes.  Just for the record, I never said anything about a third hive.  That suggestion came from straight from the hubster.  Not that I haven’t been thinking it, but I wasn’t gonna say it.

Ants have been a problem for several weeks now.  Every time I lift the top covers, ants scurry around the feeders and down the sides of the boxes.  Not a huge infestation, but enough to be annoying.  I also see spider mites and other creepy crawlies that are enticed by sweet sugar syrup and the smell of honey.

I’d previously posted the hive enhancements shared by members of my beekeeping association.  These enhancements consist of PVC end caps that, when filled with water or vegetable oil, form mini-moats at the base of the hives.  So unless the insects are good swimmers, they’ll likely become floaters.   Mine will be filled with water so they’re easy to fill and easy to flush out.  This will be done regularly because floaters make good stepping stones.

Thank goodness the hubster loves projects.  We made our usual 4 or 5 trips to Home Depot to get exactly what was needed for his “improved” design.  For some reason, men can never just look at another design and replicate it.  There always has to be a one-up.  This is not a complaint, just an observation.  In fact, his one-ups are pretty ingenious and have a high success rate.  He created bottom frames footed with the PVC caps and held on with heavy screws and bolts.  They’re very solid and the hives set right on top of them. 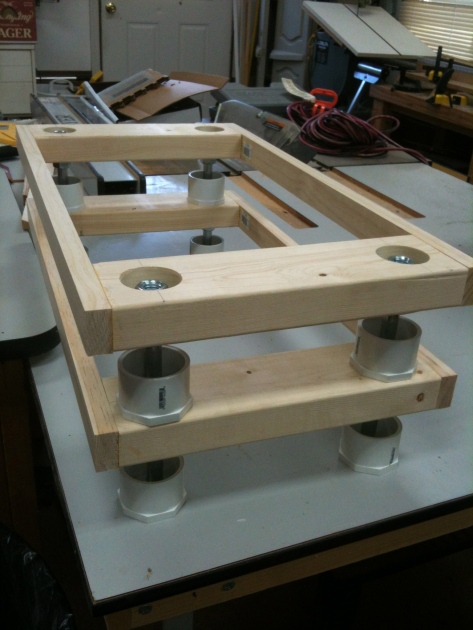 Two ant deterring frames footed with PVC caps that will be filled with water.

Preparing for Our Mission
I suited up, the hubster brought up the frames, and I carried up 4 quarts of sugar syrup. I started separating GH1 and realized I’d forgotten my hive tool and brush. Had to run and grab those. Hubster set two cinder blocks between the hives as a place to set the boxes. The feeder pail was completely empty. They’d gone through about 5 quarts of syrup over the last week, so they’ve been feeding like crazy.  Just before filling their buckets, the hubster asked me if I’d added the Honey B Healthy supplement ($30 a bottle!) to their feed.  I forgot AGAIN – 2nd week in a row. Ugh!

GH1 Having Queen Issues
I opened GH1 and saw a comb ladder leading to the top board.  Immediately, I ran down to the shop to get a new box and frames.  GH1 bees weren’t active. Just going about their business. I decided to inspect for the queen. I’ve been digging into this hive for over a month trying to determine whether it’s queen-right. The side frames on the top box haven’t been touched, so false alarm – no need for a third box yet. The bee population is not increasing, and may even be decreasing. I looked at every frame and saw no sign of the marked queen. Doesn’t mean there isn’t another queen in there, I just can’t find her. On a good note, there were no drone cells and no supercedure queen cells, but I didn’t see any new larvae either.  I can’t keep waiting to figure it out.  I’ve decided to purchase a new marked and mated queen and solicit help from someone in my bee club who can identify and remove the existing queen, if there is one.

We moved GH1 in two chunks to the temporary holding place.  Hubster removed the original top blocks, shifted the bottom blocks 8 inches outward and leveled them.  We added the PVC frame and positioned the bottom board over the frame.  Perfect fit!   Just in time, since GH1 was starting to get irritable.  I assembled the rest of the hive and moved on to Yellow Hive 2 (YH2). 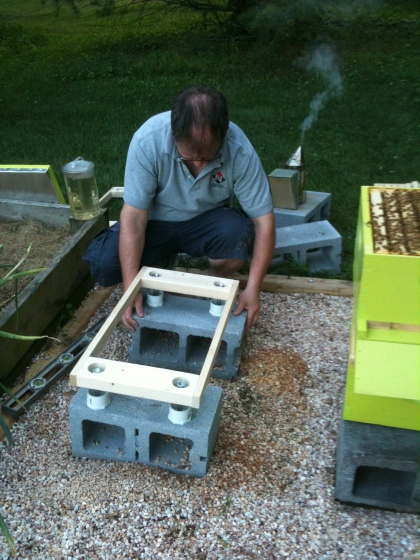 Unlike GH1, YH2 is growing like crazy and the girls are much more irritable and active.  We moved quickly on this one, no inspections.  I transferred the bee-filled boxes, the hubster aligned and leveled the blocks and added the frame, then I started to reassemble.  The girls were getting angrier.  That’s when the smoker burned out.  Hubster made an emergency run to reignite the smoker.  I was left with angry, darting bees.  Even in full gear, I worked faster and faster.  I decided not to wait for the smoker and just slid the boxes back on, taking down a few casualties in the process.  Hubster returned with an active smoker and a few choice words, but the deed was done.

Bees do not like it when other bees are killed.  Communication in the hive is instantaneous, which is why smoke is so important to keep them settled.  The sides of YH2 were lined with bees trying to inspect the damage and clean bee parts that extruded from between the boxes.  It’s what they do, clean house, remove the dead, protect the hive.  Oh, the guilt!

I visited the hives this morning.  Both are active and GH1 bees are flying in and out of the right hive.  Good news.  The PVC caps are filled with water, ready to foil any hive robbery attempts by the ants and creepy crawlers.  I’ve determined my next action for fixing GH1’s queen issues.  And I’ve decided to install a white board checklist in the greenhouse, to be reviewed before each inspection…because lack of preparation is unacceptable.

It wasn’t pretty, but mission accomplished. 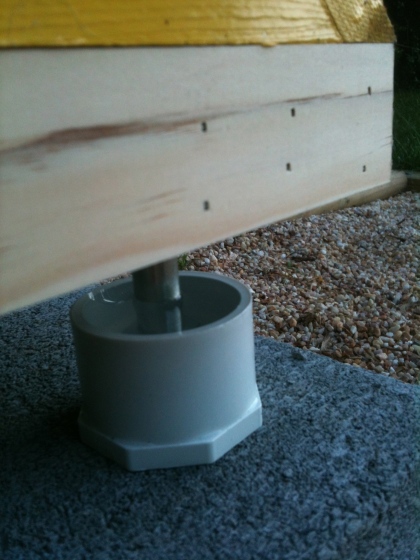