“Mistakes are good,” says Michael Bush, author of the book “The Practical Beekeeper”. But when you’re the beekeeper mucking up royally, and the bees are suffering for your stupid mistakes, it feels horrible! If you’re a beekeeper, then perhaps you’ve experienced those dysfunctional episodes where we decide to take on too much at once, we don’t do our research or plan our steps, then find ourselves running amuck in our white suits, surrounded by angry flying bees darting at our heads, with boxes disassembled and lying about.

That’s what happened to me. I inspected Pink Hive, which swarmed over 3 weeks ago, then returned to their hive and at some point swarmed again. I checked the hive about 3 weeks after the initial swarm, and the frames contained a small amount of older brood, no stores, nada. Like it had emptied out and dried up. 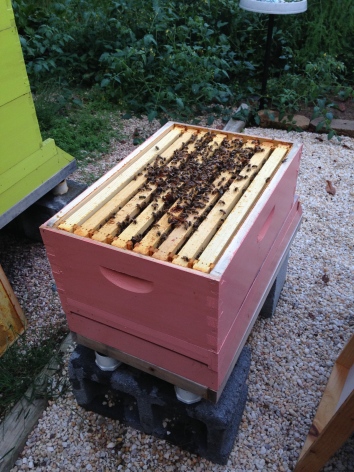 Mint Green Hive is strong, but the hive’s location is horrible as it sits 4 feet in front of the other hives and faces the asparagus, which is now a fern-like forest. Being the adaptable little creatures they are, they simply changed their flight path to the side rather than straight into the forest. Regardless, this seemed like a good opportunity to combine the weak hive with a strong hive AND move Mint Hive all at once.

First, I should know better than to come home from work at 6 PM and go out and take on a major bee project when the evening is quickly turning dark. I managed to condense Pink Hive. Then I put a sheet of newspaper on top and proceeded to disassemble Mint hive and add those boxes on top of Pink Hive. In the meantime, Mint Hive is waking up and starting to wonder “what the heck?”, and their foragers are returning and flying around in space (where their home USED to be just a few minutes prior) wondering “what the heck?”. I realized the magnitude of my mistake about the same time I realized I was wearing shorts and Mint Hive decided to attack my legs.

I ran through the yard, guard bees in hot pursuit, through the garage and into the house. Bees started buzzing through the kitchen and the cats came to life. My husband chased me out of the house and through the window I saw him waving his finger and giving me the parental head shake before he joined in with the cats to catch the flying bees.

When I was finally clear of bees, he let me back in the house to swap shorts for long pants and sandals for muck boots. . I ventured back up to the disaster area. I looked at the three boxes of angry bees on top of pink hive, then back at the lost bees flying in space, and determined that I had to move Mint Hive back to its original location. Ugh, it was getting dark fast, and they were MAD!!! I was also covered in attack pheromones, which didn’t help matters.

I worked as quickly as I could. I pulled the Mint Hive boxes back off. Of course, the newspaper stuck to the bottom box. I was working alone. I tried to pull off what I could, but it was stuck. I was surrounded by crazy bees and had to run for cover a few times, but I kept returning and finally managed to get Mint Hive reassembled. It wasn’t pretty. I went back to the house, still pursued by guard bees, some of which found their way inside my suit and were stinging me. I finally stripped off my gear, left it on the patio and ran in the house .

The next morning I gathered gear from the patio and walked up to see the state of Mint Hive. Those poor bees looked as though they’d been out all night trying to patch up the disarray. The boxes were misaligned, extending at least a half inch on some edges, legs and body bits extended from the seams, and a good 2/12 inches of newspaper flapped around the perimeter of the box. They saw me approach and immediately became defensive. The guilt was overwhelming.

Another lesson learned the hard way. NEVER ADD THE STRONG HIVE TO THE WEAK HIVE!!!! Condense the weak hive to one box. Open the strong hive and add a sheet or two of newspaper on top. Add the weak hive on top of the newspaper. Then add sugar syrup on top of the entire hive. If I had researched this first, I would have saved myself and my bees A LOT of stress and stings.

I successfully combined Pink Hive on top of Purple Hive the following week. They were still stressed, and sadly the newspaper had somehow punctured, enabling Purple Hive to enter Pink Hive much faster than planned and resulting in fighting and a pile of dead bees at the base of my hive. 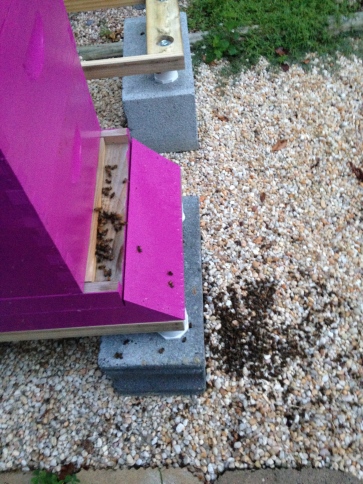 By morning most of the fighting had ceased, and by evening the combined hive appeared to be at peace.  Thank goodness.  I suspect that I will be combining many hives down the road.  I can certainly say that I won’t make that dumb mistake again and my sincerest condolences go to the bees who lost their loved ones in the midst of my error.  But I am a better beekeeper, and as a result, future generations of BooBees will benefit from their sacrifices.  Amen.

One thought on “Combining Hives – What NOT to do”