Spring is already passing quickly and I’m falling behind on my reports. All three hives are doing well, but blue hive especially is bursting at the seams, perhaps ready for a split…or two to help prevent swarming.  I’m seeing reports of swarms everywhere.  They say happy bees swarm, so I guess its a good thing, as long as you can retrieve them and place them back into your own hives.

With that said, I gave all three hives a good inspection last weekend…

I installed Yellow Hive about two weeks ago.  They’re feeding well, they appear active, they have some brood, but not tons of it.  The outer frames have new comb and they’ve built a comb ladder up to the inner cover. That tells me they’re ready for a new box so they can continue to grow.  Granted!  Yellow hive is now two levels high.   I closed ‘em up and moved on to Green Hive…

Green hive is just rolling along, not terribly active, not filled to the brim with bees, but doing ok.  I suspect they had too much space over the winter and had a hard time of it, but they made it through.  I reduced their boxes last week (04-19-14) from three to two, hoping that would reduce their stress levels by giving them less area to maintain.  They weren’t filling the space anyway, and this configuration seems to suit their size and activity much better.

I considered requeening, but decided against it.  And I’m glad.   Their numbers looked good.  They were out and about, they had some brood, the laying pattern looked fine, few drones, all indicators that the queen is still going, albeit slow.  When the time is right, they’ll make their own queen.  Besides, if I spend money on a queen, I want another BeeWeaver Texas queen like I have in Blue Hive.

What can I say about these little buggers?  My little blue hive overwintered beautifully and has taken off.  Tons of bees, they’re super active, a bit temperamental, but busy laying lots of brood and more drone comb than I care for.  I fear this hive may be thinking about swarming in the near future.  No signs of queen cells, but lots of drone laid in burr comb.  So much so that the frames between the boxes are sticking together.  I read that adjusting the bee space between boxes will help with this, but I don’t know how to fix the space between boxes.  It is what it is.

This is a great time to split the hive, start a nucleus (nuc) colony, and see if they’ll make a new BeeWeaver queen.  I took out two bee covered brood and larvae frames (I probably should have taken more bees) from blue hive and replaced them with empty brood comb frames that I had in the freezer (pre-thawed, of course).   I added the brood frames and bees to my nuc, surrounded by wet drawn comb frames and a full frame of honey.

For feed, the hubster used his smallest size drill bit and drilled about 10-15 holes on the lid of a mason jar filled with sugar syrup.  Worked perfectly.

We’ll closed Baby Nuc for 24 hours.  The following evening, I placed a branch in front of the nuc entrance and added the entrance reducer on the smallest setting.   The branch will cause the bees to reorient themselves as they come out of the hive so they return to their new location rather than returning to their previous hive.

You may also notice that Baby Nuc is not painted.  I actually painted with with Linseed oil rather than paint.

Important to keep an eye on the night time temps.  If it looks like freezing, then Baby Nuc will come inside for the night. 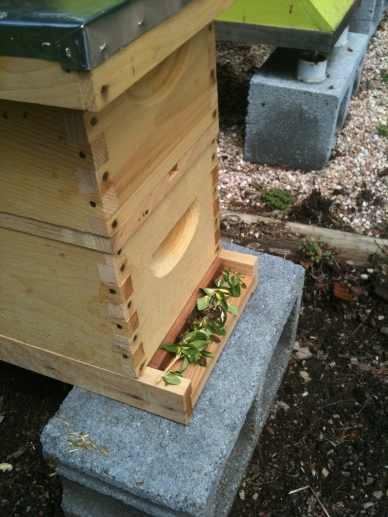 The Hive Family is Growing

We moved our raised bed to make room for more hives.  We now have space for two more next to our existing hives.   If all goes as planned (which it never does, but if it does), Baby Nuc will transfer to an 8 frame hive, and I will split Blue Hive again using a much better method that I learned about AFTER making this split (of course).   Lots of bees in blue hive.

Of course, new hives  mean new colors.  Woo hoo!  I have the paint selected and sitting in the workshop, ready and waiting to be revealed!

2 thoughts on “Splitsville for Blue Hive”